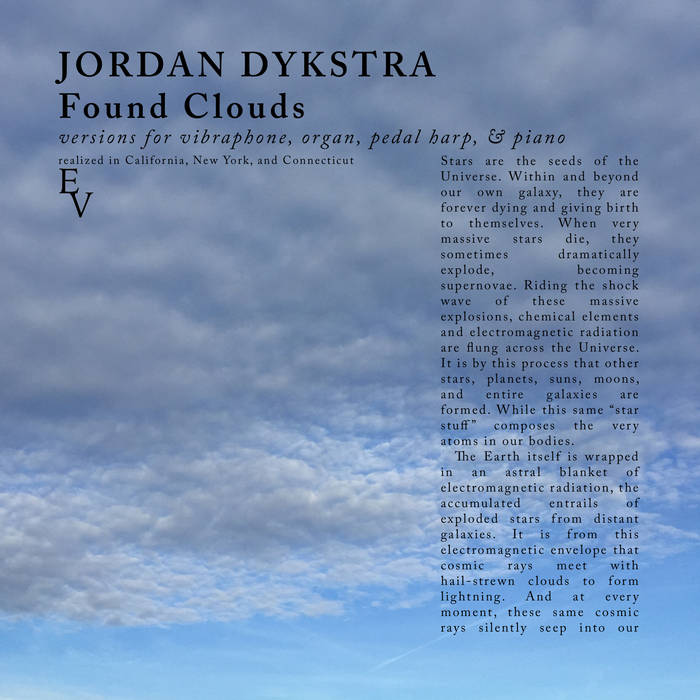 "The series explores an unconventional notion of the musical work. [These are not] mere collection(s) of pieces in a suite nor a set of movements illustrating some notion of development. Rather, each individual piece manifests the structural logic of the project as a whole; correspondingly, the pieces taken together coalesce around the structural principle inherent in each. Any individual track, a piece in its own right, is a realization of the central inherent concept. Such an approach goes beyond interpretation. It is rather like pursuing the same idea from multiple perspectives. It is perhaps worth noting that four is the smallest composite number." (J. P. A. Falzone)

Stars are the seeds of the Universe. Within and beyond our own galaxy, they are forever dying and giving birth to themselves. When very massive stars die, they sometimes dramatically explode, becoming supernovae. Riding the shock wave of these massive explosions, chemical elements and electromagnetic radiation are scattered across the Universe. It is by this process that other stars, planets, suns, moons, and entire galaxies are formed—not to mention the atoms in our bodies. The Earth is wrapped in an astral blanket of electromagnetic radiation, made from the entrails of exploded stars from distant galaxies. It is from this electromagnetic envelope that cosmic rays meet with hail-strewn clouds to form earth’s lightning. While at every moment, these same cosmic rays silently rain down upon every inch of the earth. They are falling upon you now, as you read this. We know this is true, because one man, Charles Thomson Rees Wilson, fell in love with clouds and made this cosmic rain visible.

Wilson’s love of clouds intensified as he began studying “glories.” A so-called “glory” is the rainbowed halo occasionally seen surrounding objects, often at sunrise, when the air is damp. It’s a bit of an optical trick on the eyes—light from the sun refracting through the vapors of the moistened atmosphere—and it’s undeniably beautiful. In order to better understand glory phenomena, Wilson sought to create and study clouds in his laboratory. And in 1911, he invented the first “cloud chamber” to do just that. Infusing an enclosed chamber with water vapor, he then expanded and cooled the air inside. Like a comet in a wine glass, ionized particles, including cosmic rays, flashed into view and disappeared after a few seconds, becoming visible as condensed water vapor latched onto the ever-falling cosmic rain. These experiments with home-made clouds accidentally advanced the foundation of modern particle physics, which helped win Wilson a Nobel Prize in 1927.

I couldn’t help but think about Wilson’s work when I first listened to Jordan Dykstra’s Found Clouds, the inaugural release of the Seeing a Forest in a Tree series by Editions Verde. The music was initially inspired by the microtonal tuning system that composer Ben Johnston used for his Suite for Microtonal Piano (1977), as Dykstra found himself near a so-tuned piano while studying at Cal Arts in 2016. Inspired, he devised a series of “cloud scale patterns” to compose for the instrument.

Dykstra’s cloud scales do not feature repeating pitches across the octaves, as in traditional scales. Instead they are based on repeating interval modes applied to the chromatic spectrum. This gives rise to scales whose fundamental pitch and other scale tones vary from one octave to the next, forming “non-one-octave-repeating” patterns. When composing, Dykstra layers a sustained fundamental pitch with other non-sustained cloud scale tones into abstract atmospheres. This approach allows the listener to savor the cumulous harmonies and the unique shimmer of the microtonal tunings of the instruments employed. Each track offers a different instrument and tuning: vibraphone (equal temperament), pedal harp (just intonation), Farfisa organ (ditone tuning), and piano (Johnston’s tuning).

Through bowing, plucking, and gently percussing, ephemeral tones emerge and disappear, softly flashing through a sustained haze—not unlike the cosmic particles seen in Wilson’s “cloud chamber.” With Found Clouds, Dykstra stretches time, evaporates expectation, and immerses the listener in vaporous abstraction. Close your eyes, and drift among the clouds.

New sounds from Mavi, Ivy Sole & Moderator, plus AJ, the One joins the show, for her latest release